Villiger Export Round (Pack of 5 Cigars) 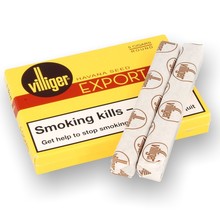 Pack of 5 Villiger Round, tissue wrapped, Swiss made cigars!
The same iconic cigar as the Villiger Export but Un-pressed!

The Villiger Export round cigars are made from the same famous Havana blend as the pressed Export but are not pressed in the final stages of production and are often noted as having a slightly richer flavour and smoother draw as a result. The cigar filler provides a complex mixture of rich flavours with the majority of tobacco originating from Cuba, which is finished with a neat Sumatra wrapper. This balances the Cuban flavours making them highly suited to the cigar smoker who is looking for a fuller flavour but hasn’t quite acquired the taste for a full Cuban yet. Does the cosmetic difference of pressing really make a difference or is it all in the imagination, you decide and feel free to let us know.

The Villiger Export round are a mid sized cigar with a medium strength, which are ideal for the average Cigar smoker looking for a fuller flavour. Villiger do not require cutting and can be enjoyed straight out of the box.