Talamona di Paolo Croci They were difficult times in Italy when Cornelio Talamona, a carpenter by trade, began to manufacture pipes in his Bottega in 1929 to earn an additional income. When his son Cesare left school in 1945 at the age of 15, times were worse. There was neither a place for an apprenticeship nor another job to be found in the destitute and war-torn country. And Cesare felt no desire to a continuing school attendance which moreover would have costed money. So the father, beset by worries, decided the boy might lend him a helping hand in the workshop where at the time, priority was placed in building furniture. In 1970 Cesare started the pipe business, based near Lake Varese in the Lombardy region he soon became well known around Italy for his craft. Talamona quickly became famous around the world for his creativity in large pipes. Once Cesare retired in 2007 at the venerable age of 85 years old, and not wanting to bring his legacy of high Italian craft to an end, he entrusted everything to Paolo Croci, who, in 2010 started the limited production of the brand, respecting the will of Cesare Talamona to continue to produce high quality, handmade, artisanal pipes in generous sizes. They continue to this day with the motto "Every pipe has a soul and who buys it finds it themselves".

Talamona di Paolo Croci Dragon This Talamona Dragon is a Stubby poker shape that has had a rich green stain before finishing with a unique dragon scale rustication, This is offset with a rich blood-red saddle stem with the Talamona spot inset.

ONE OFF PIPE: This is a one-off pipe and the pipe in the picture is the exact pipe you will receive. Please note that colour varies depending on your computer monitor and may not replicate the colour exactly. 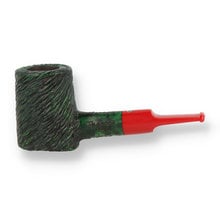 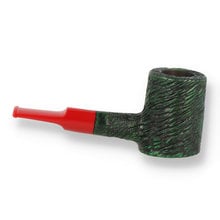 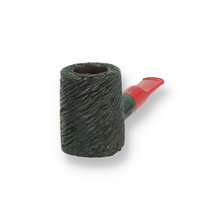 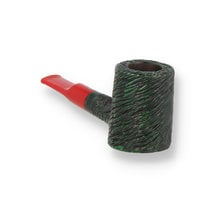