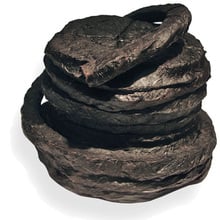 BUY BRITISH The Kendal Black Irish is a British made Twist tobacco made up of predominantly dark fired leaf with the addition of a small percentage of dark air cured Indian leaf.

Black Twist Black twist is made from Brown twist, which has undergone a further process of cooking under pressure, which turns it black. This cooking process in the Black Twist removes some of the stronger tar and nicotine elements, which produces a less intense smoke than the brown twist but still has a strong intense flavour and wouldn't be recommended for the beginner.

Pigtail Twist: As you might guess from the name the pigtail resembles a pigs tail. There are rumours that pigs tails used to be cut up and smoked but there is no evidence of this. Pigtail has a thinner cross section, which is generally preferred for chewing but can also be used for pipe smoking.

Loose packaged to order: Here at the Black Swan Specialist Tobacconist we buy our Black Irish Twist tobacco on large rolls. This means we hand cut and package your tobacco and inspect every piece before it reaches you. Your order may contain small pieces to obtain the exact weight ordered.