One of the major gripes with pipe smokers and their partners is the state their mouthpieces get in due to oxidisation and general manky build up. Even though most pipe manufacturers have moved to Acrylic stems, which aren't as bad as the Vulcanite the problem still exists and no standard cleaning fluid will remove it.

Over the years we have come across numerous stem polishes and our favourite was the Denicotea mouthpiece polish however this is no longer available as a single tin, you have to buy the full denicare pipe maintenance kit.

However we decided to try out the Savinelli polish in the early part of 2011 and we were quite shocked with the results. It's not as thick and abrasive as the Denicare but something in it dissolved the oxidisation more effectively than we have ever seen. It still takes a good amount of elbow grease if you don't have a polishing wheel but it's surprisingly more effective than most of the stem polishes we've come across in the past. 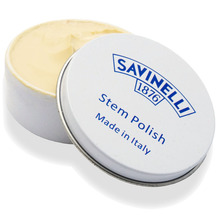 Self adjusting pipe reamer (Not British Buttner)
From £4.99
1 size