BUY BRITISH NOT FOR THE FEINT HEARTED!! (You have been warned) The Samuel Gawiths Black Irish XX is produced from very strong, dark leaves, which are fired and cooled under pressure to turn it thick black. The cooking process in the Black Twist removes some of the stronger tar and nicotine elements, which produces a less intense smoke than the brown twist but is still has a strong harsh flavour and wouldn't be recommended for the beginner. The XX gives a clue! It is even stronger than the standard Black Irish (You have now been warned twice)

You may wish to mix the Black Irish with other tobacco's to appreciate the flavour rather than smoking it on the rocks.

Twist/Rope: Tobacco leaves that are twisted into a rope. The rope requires slicing and rubbing for smoking depending on the desired burn rate. Traditional Twists and Rope are fermented under heat and pressure, which adds depth and character but the full bodied flavour can prove overpowering for the less experienced smoker.

Irish twist: Irish twist is the thickest twist which is generally preferred by pipe smokers but can and is often chewed. The Samuel Gawith is packaged in vacuum sealed tins for freshness and contains large chunks of twist. 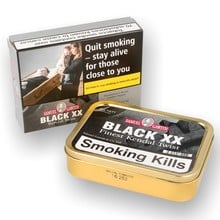