Peterson Arklow X220 The Peterson Arklow X220 is a large full bent briar with a mid sized, billiard shaped bowl. The X220 has a thick wall, with a deep bowl and large bore. The Billiard shape is one of the most popular bowl shapes as the shape is more comfortable in the hand. The deep bowl makes for a versatile pipe as the fill can be varied for a short satisfying smoke or a long intense fireside session. 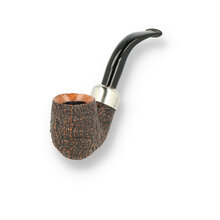