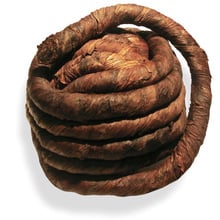 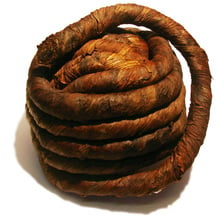 BUY BRITISH The Kendal Brown Pigtail is a British made Twist tobacco made up of predominantly dark fired leaf with the addition of a small percentage of dark air cured Indian leaf.

Brown Twist: The Brown twists comes straight from the spinning machine without going through the further cooking process. This arguably leaves the brown twists stronger as the curing process would remove some of the stronger Tar and Nicotine elements. However it is generally found by most smokers that the brown is less harsh smoke than the black. Which ever way this tobacco is viewed it is still a very strong tobacco which we would only recommend for the experienced smoker.

Pigtail Twist: As you might guess from the name the pigtail resembles a pigs tail. There are rumours that pigs tails used to be cut up and smoked but there is no evidence of this. Pigtail has a thinner cross section, which is generally preferred for chewing but can also be used for pipe smoking.

Loose packaged to order: Here at the Black Swan Specialist Tobacconist we buy our Brown pigtail twist on large rolls. This means we hand cut and package your tobacco and inspect every piece before it reaches you. Your order may contain small pieces to obtain the exact weight ordered.