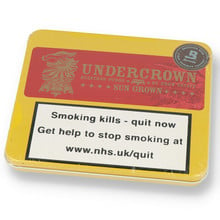 Drew Estate Undercrown Sun Grown Cigars: Drew Estate have taken their art of blending premium cigars to new heights. They have worked their extensive knowledge of blending to produce this delectable cigar. It features an Ecuadorian Sumatra seed that has been sun grown to increase the depth and sweetness of the leaf. The binder is a Connecticut River Valley, stalk cut then cured, complimenting a secret blend of Nicaraguan fillers finished off with a single leaf of extensively aged Ligero from the Nueva Segovia region which enhances the complexity and richness of the blend beautifully.

Preparation: The Sun Grown Coronet are a medium to full-strength cigar, with an outstanding amount of flavour. They are a premium hand-rolled cigar and therefore require cutting or punching before they can be enjoyed.