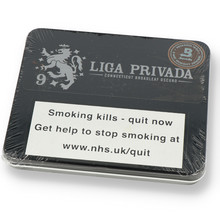 A tin of 10 cellophane-wrapped hand-rolled Cigars!

Drew Estate Cigars:
Born in 1996 the Drew Estate is a relatively new Cigar brand yet are now one of, if not the largest producers of premium hand-rolled cigars in the world with worldwide admiration. And this isn’t down to fat cat boys with big pockets marketing a brand to success.
Drew Estate was born in 1996 by Jonathan Drew & Marvin Samel with great passion, vision, aspiring dreams, and a “can-do” attitude.
The two frat brothers started out small…. small, as in a 16 square foot retail kiosk in the World Trade Center in NYC with a bank account running on fumes. In late 1999 Jonathan Drew moved to Estelí, Nicaragua with the hopes of starting a rebirth in the cigar world. The norm for new companies would be to outsource their Cigar rolling but they wanted to do it their own way (not the easy way) and with a handful of rollers and an even smaller handful of money, the story of “That Crazy Gringo” began.
In as little as 2 years the drew estate had grown to epic proportions and captured the attention of Forbes magazine who did an article called Cult Brands and included Drew Estate alongside such brands as Krispy Kreme, Apple & Harley Davidson!
Today the passion is still strong as they have built a family within the company who all devote great passion to making the finest and most characterful Cigars in the world.

Liga Privada No.9 Cigars
Translated to English, “Liga Privada” means “private blend.” It is the perfect name, as this cigar was originally crafted without any intention of releasing them to the general public. They began blending the “perfect” cigar which was to be saved exclusively for the Drew Estates personal humidors. Dozens of intricate blends were created, but No. 9 was flawless in both flavour and character. Rich, complex and full-bodied without being harsh, this amazing vitola is best described in one word: satisfying.

Preparation:
Please note the Liga Privada are premium hand-rolled cigars and therefore require cutting or punching before they can be enjoyed