Davidoff Cigars: Davidoff has an unsurpassed worldwide reputation for producing some of the finest Cigars in the world. The story began in 1906 when the iconic Zino Davidoff was born into a family with a long history in the tobacco trade. His passion and enthusiasm turned his family's modest Tobacconist shop in Switzerland into a cosmopolitan hotspot drawing many A list celebrities through the door as he re-wrote the manual for the Cigar market. Before Zino Davidoff the humidor did not exist!!

In 1967 Zino Davidoff set the Cigar World alight (see what we did there) by teaming up with the Cubans and developing the davidoff cuban line which gave Cuban Cigars the reputation they still enjoy today. However being so fanatical about his brand the relationship crumpled over quality issues as he publicly burned 100,000 Cigars rather than sell them. He moved production to the Dominican where he believed the quality of rolling was far superior. It is widely recognised that this influence is the reason why Dominican Cigars are the No.1 selling Cigars in the world.

For 2016 there are fresh rumours that Davidoff is going to reintroduce the Davidoff cuban line under strict conditions. One thing we can be sure if is that we will never see them if the quality doesn’t match the standards of Davidoff.

Storage: The Davidoff Cigarillo range are not premium Cigars so do not require storage in a humidor or any specific conditions. Preferably they should not be stored in dry heat for long periods as they will dry out and lose flavour over time.

Preparation: The Davidoff Cigarillos are ready to be smoked straight from the packet. 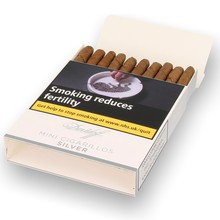