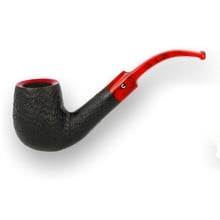 Comoy's Pipes Francois Comoy and his brothers started making clay, boxwood and beech pipes in 1825 in the small monastic town of Saint-Claude in eastern France. Claude and his son Louis discovered that briar had vastly superior qualities and from 1848 made pipes only in this wood. In 1879 Francois’s son Henri, who was born in 1850, moved to London with a small bag of tools, but a great deal of experience. Henri set up a small factory in Seven Dials which is today known as Cambridge Circus. He was one of the prime movers in the establishment of the briar pipe trade in London and is credited with being the author of the appellation “London Made”.

ONE OFF PIPE: This is a one off pipe and the pipe in the picture is the exact pipe you will receive. Please not that colour varies depending on your computer monitor and may not replicate the colour exactly.