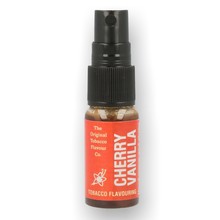 As you probably know all of the flavoured hand rolling tobaccos are being discontinued as it will become illegal to sell them as of May. But don't worry! we have the solution! Tobacco Flavour Sprays. These sprays allow you to flavour your tobaccos just as you have been accustomed to, ranging from Coconut to Vanilla, these are the perfect solution to a bad situation.

The Original Tobacco Flavour Company Flavour Spray is a flavoured liquid intended to enhance the flavour and character of your tobacco. It is exactly the same flavours as Auld Kendal used to use on their tobacco's.

How to use 1. Spray directly onto tobacco in pouch. (1-2 sprays per 30g of rolling tobacco.) 2. Gently mix. 3. Leave spray to settle in over night. 4. Enjoy your favourite flavoured tobacco

Cherry and Vanilla flavour. This spray is a flavour enhancer for hand-rolling tobacco produced by The Original Tobacco Flavour Company. It has a beautiful flavour of Cherry and Vanilla which really enhances your standard tobacco.

Flavours up to 5kg of tobacco * Please shake the bottle before spraying as the contents do settle. * Ideally the liquid should be warm before spraying to ensure the mixture mists rather than squirts. * We recommend spraying once on 30g. Allow the flavour to be absorbed. Repeat if required.