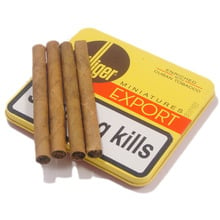 Unfortunately the Villiger Export Miniatures have been de-listed from the Villiger line up in the early part of 2011. They have been very popular over the last few years and we are sad to see them leave but it looks like they are gone forever.

An attractive embossed tin containing 10 miniature cigars! The iconic Villiger Havana Blend cigars now in a miniature ideal for those in between moments!

The Villiger Export pressed, famous Havana blend has an unsurpassed worldwide reputation as the only day to day smoke, that provides a fulfilling flavour. This is because the majority of the tobacco in a Villiger Export is grown in Cuba before the Cigar is rounded off with a Sumatra wrapper, which takes the edge off the Cuban tobaco for those who want a fuller flavoured Cigar but haven't yet acquired the taste for a full on Cuban.

The Villiger Export miniatures are a small cigar giving a short but satisfying smoke. If you like a fuller flavour cigar but don't have the time for a large cigar the Villiger miniatures are probbaly the cigar for you. The Villiger range of cigars do not require cutting and are ready to be enjoyed straight out of the box.

Most Popular in Miscellaneous ...