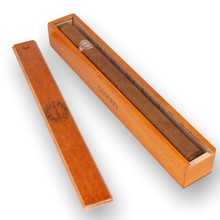 Sancho Panza
Sancho Panza takes it name from a masterpiece of world literature. In Don Quixote, the famous 17th Century Spanish novel by Miguel de Cervantes, it was Sancho Panza who served the errant knight as his faithful squire. His name was first used for a Habano in 1848 and since then it has enjoyed a reputation for quality amongst discerning smokers.
For a limited time only, the Sancho Panza Sancho is available as a single in a varnished slide lid box.

Sancho
The Sancho is a Gran Corona size which measures a whopping 9 ¼“ (236mm) x 47 ring gauge and is the only cigar of these impressive dimensions still in current production.

Made popular by the iconic but now elusive Montecristo “A” of the same size, the box was affectionately referred to by many as the “coffin” and proved extremely popular for those seeking a gift for a cigar enthusiast on a special occasion such as Father’s Day, a wedding, becoming a parent or a landmark birthday.

Offering over 2 hours of smoking pleasure, this gift will no doubt help to mark and make any occasion memorable for the cigar lover.