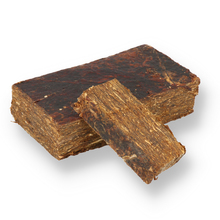 Plug Tobacco: The Samuel Gawith Plug Tobacco comes in an un-prepared plug form. Plug blocks are cut from a cake, which is produced by fermenting tobacco leaves under immense pressure. A plug requires slicing and rubbing to prepare it for smoking. Leaving large slices or chunks will reduce the burn rate whilst thinner slices will provide a faster more intense burn. Due to the added fermentation process, plug tends to be full bodied and would only be recommended for the experienced smoker.

Grousemoor Plug The Samuel Gawith Grousemoor Plug is for lovers of pure pressed Virginias. Created in the heart of Lakeland, using the finest Virginia leaves that Samuel Gawith are renowned for which has been top dressed with the infamous floral Lakeland flavouring. The smell of the tobacco is almost that of a flavored tobacco. When it's burning it produces a very sweet aroma at the beginning and then dissipates into a less evident, and yet pleasant, aroma. The taste is also very sweet, without being irritatingly so. Highly recommended if you're after a traditional British Virginia that is serious and yet sweet.