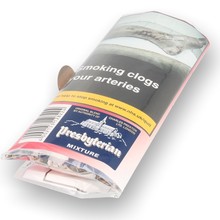 The Presbyterian Pipe tobacco originally had no name. It was blended before the first World War especially for the Very Rev. Dr. John White, sometime minister of the Barony Kirk in Glasgow and Moderator of the General Assembly in Scotland in 1929. He introduced it to Stanley Baldwin, later Earl Baldwin, Prime Minister in 1923, 1924 and 1935. He liked it so much that regular supplies were sent down to him and it was he who suggested that it be called "Presbyterian Mixture".

A traditional ready rubbed English mixture made primarily of Virginia and Oriental leaves with a touch of Latakia. Being ready rubbed this tobacco requires no rubbing for added convenience and enjoyment.