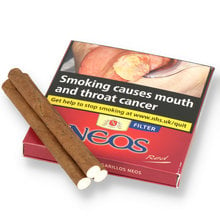 Neos Full Leaf Filler: The full leaf range from Neos is new to the UK for 2016 and replaces the former broken leaf filler Cigar that has been around in the UK for many years. The former Cigar was aimed at the budget conscious smoker but after much feedback from our customers it was decided that the UK Cigar smoker wants the better quality Cigar so with great delight we can now offer you the full leaf version which smokes longer, smoother and cooler making them one of the finest miniature Cigars on the market.

Neos Feeling Red: The Neos feelings Red are produced from a blend of Burley and Virginia, which have been infused with an aromatic Vanilla flavour before being finished with the highly sort after Java Besuki wrapper, which adds even more flavour and character to these cracking miniature cigars.

The Neos Vanilla feelings are a mild filtered cigar, which are ideal for a day time smoke or whenever the feeling arises. They do not require cutting and can be smoked straight out of the tin.