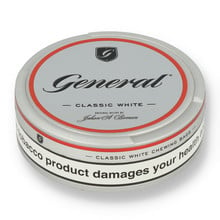 General Cut Titanium Original Chew Bags.
From the second you open the can you are hit with an intense tobacco fragrance, lemony hints in the background, it smells “promisingly Swedish” – especially for connoisseurs of Swedish chewing tobacco.
Made from choice cut tobacco in a small paper bag with a unique weave specially designed to be chewed to release both flavour and nicotine.

General Cut Titanium Original is an extra strong chew bag with a strong nicotine release. A distinctive and spicy tobacco flavour with notes of bergamot, tea, hay and leather. The tub contains a handy compartment in the top to discard of your used bags.

How to use
In order to use chew bags, you simply take the portion in your hand and lift your upper lip. Then place the snus portion under your lip and leave it there for it to release the nicotine slowly and gradually.

Do not swallow the chew bag after use, discard as if you would chewing gum.