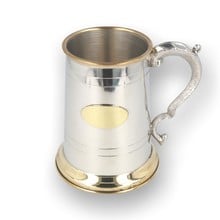 Polished Brass Lip Tankard This one pint tankard is a perfect option as a commemorative gift to mark an important birthday, a graduation or another notable achievement. The beautiful 13cm by 8cm one pint pewter tankard has a straight sided body that is detailed by two sets of horizontal line detailing around its circumference and a brass lip and base. This contrast between the highly polished pewter and brass creates a striking effect and is repeated by the inclusion of an oval brass plate which can be engraved upon. The tankard is then beautifully finished by a curved and textured Georgian style handle.