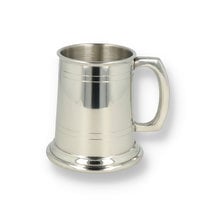 Half Pint Straight Polished Pewter Tankard Sometimes less truly is more, and that mantra is never truer than with this elegant and high-class half pint tankard which relies on clean lines and traditional craftsmanship to produce an understated effect that really has the wow factor. Brought to you by English Pewter Company, a world-leading exponent of working with pewter, you can be sure of the high standards of craftsmanship that have gone into the creation of this half-pint tankard, making it an ideal gift for someone special to you. The 9.5cm by 7cm tankard has a straight body with a plain but highly polished finish and a square handle, which together with the classy cream and black box creates an overall effect that will leave any recipient speechless at the quality of their gift.

Most Popular in Giftware ...