THIS TOBACCO HAS NOW BEEN DISCONTINUED, THE LISTING HAS BEEN LEFT HERE FOR HISTORICAL REFERENCE AND INTEREST

2018 is proving to be a sad year in the Tobacco trade as the iconic Dunhill Tobacco has been delisted from the worldwide market and we are told that this time it is for good!! Are they telling the truth this time ………. who knows ……… but hopefully we will see it on our shelves again one day.

In the meantime please check out our Charatan range of Pipe Tobacco’s which have been produced as a direct replacement for the Dunhill Tobacco and we have been told it is very close to the original.

As usual we have left the listing on our website for historical reference and interest.

THE RETURN OF DUNHILL! Was it a marketing exercise? Was it a mistake? Did the big boys fall out? Who cares its back and the future looks bright! The Dunhill range of Pipe Tobacco's was discontinued back in 2008 and it looked like the coffin lid had been nailed never to be disturbed again. However someone somewhere has listened to the constant groan from the mass of mourning pipe smokers worldwide. A select number of Dunhill Blends have been re-introduced to the UK market with a reputable distributor and production in the Orlik factory to Dunhill's strict and highly secret recipe.

Dunhill 221B Baker Street: Originally launched in the 1960's, My Mixture 221B Baker Street is a dark fired, traditional english style Virginia tobacco blend. This medium burning tobacco is a rich and powerful smoke with roasted side notes. 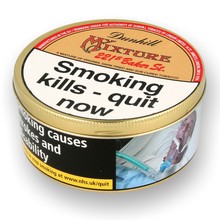