A beautiful branded box containing 5 hand rolled Cigars. Inside the lid, there is a certificate of authenticity bearing the name of the Torcedore who rolled the Cigars.

Here you are buying a very exclusive sample of the finest Cigars in the world. Highly desired by many Cigar enthusiasts worldwide. Many will store these in their reserves as collector's pieces but we think they should be smoked. So please smoke and enjoy every last draw!

Loose boxed: Drew Estate Cigars are packaged loose in a Cedar lined Box The cigars are kept in our humidors until dispatch and preferably should be stored in a humidor as soon as you receive them. If you are planning on smoking them within a couple of weeks the cigars should be okay as long as they are kept sealed in a cool dark place. 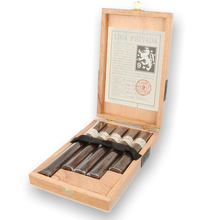