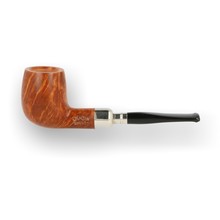 Chacom Pipes (St Claude) Chacom is a family owned company who can trace their pipe making heritage to 1825 before Briar was even discovered. They are based in St Claude which is widely recognised as the pipe making capital of the world. They are one of very few pipe manufacturers who make pipes from start to finish. From ageing the Briar right through to hand finishing.

Chacom Spigot Pipes If there was an iconic design over the last 100 years of pipe making it would be the spigot. Nothing oozes class and sophistication quite like a spigot. The Spigot evolved on the front lines as soldiers repaired their pipe with spent gun cartridges. This was soon adopted by pipe manufacturers who saw the advantages and with the convenience of a workshop developed the stunning spigot style. Chacom has two grades of Spigot, the natural and the brown. This is the natural which uses a much higher grade of briar that has very few flaws or fills so that it can be finished in a light stain which really shows off the natural beauty of raw Briar and its intricate grain patterns..

Condensing Filter/Stinger The Chacom Spigot pipes incorporate the re-usable metal filter system. The metal filter is suspended in the middle of a moisture trap, which forces the smoke to spiral round the cool metal before entering the stem. This causes condensation, which naturally removes tar and moisture deposits from the smoke trapping them in the shank for a cool pleasant smoking experience. Simply wipe clean in between smokes. The metal filter can be removed altogether for smokers who prefer a totally un-restricted full bodied smoke.