J.C. Newman Cigars Company Julius Caeser Newman immigrated to the United States in 1889 and lived the American dream. In 1895, he founded the J.C. Newman Cigar Company, which to this day, is the oldest family-owned premium cigar maker. One of J.C. Newmans earliest brands was Brick House. With the imposing brick house featured prominently in the label, Julius launched this brand to honour his family heritage and beloved childhood memories. The vintage brick house label depicts the pastoral setting similar to J.C. Newman's childhood home - the only brick building in his village, which not only served as the family home but also the town's tavern. There, locals and visitors alike gathered nightly to eat, drink, smoke, and enjoy each other's company.

Loose boxed: The Brickhouse cigars are packaged loose in a Cedar Box The cigars are kept in our humidors until dispatch and preferably should be stored in a humidor as soon as you receive them. If you are planning on smoking them within a couple of weeks the cigars should be okay as long as they are kept in a cool dark place.

Preparation: Please note the Brickhouse cigars require cutting or punching before they can be enjoyed. 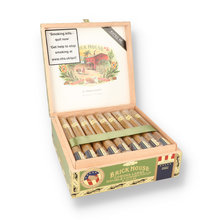